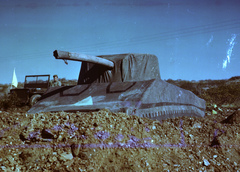 EXCLUSIVE: Warner Bros has acquired rights to tell the story of Ghost Army, a squadron of recruits from art schools, ad agencies and other creative businesses who were tasked with fooling the Nazis into thinking the U.S. had larger troop numbers than it actually did. Bradley Cooper & Todd Phillips’ 22 & Green are teaming with Andrew Lazar, who just teamed with Cooper on American Sniper. The studio has acquired The Ghost Army Of World War II: How One Top-Secret Unit Deceived The Enemy with Inflatable Tanks, Sound Effects, And Other Audacious Fakery, the book by Rick Beyer and Elizabeth Sayles that was published in April by Princeton Architectural Press. Another resource will be Ghost Army, the 2013 documentary film directed by Beyer.

The studio, Cooper, Phillips and Lazar have set Henry Gayden to write the script. He wrote Earth Tto Echo and has projects all over town. They’ll develop it with Cooper, Phillips and Lazar as producers, but obviously the hope is that Cooper will want to star in it. It’s one of those stories that is so far fetched you couldn’t make it up. The Army recruited all of these creative guys to fill the 23rd Headquarters Special Troops — future fashion icon Bill Blass was one of them — to basically fool the enemy into thinking the U.S. had troops where there were none to be found. They did this with everything from inflatable tanks mixed with a few real ones, with dummy soldiers part of the ruse that would be spotted overhead by Nazi spy planes, to impersonating radio operators to deliver phony messages that left the enemy unsure where to wage war. The unit’s sleight-of-hand tactics were credited with saving tens of thousands of soldiers and being instrumental in several Allied victories in Europe. A campaign is underway to get the squadron awarded a Congressional Gold Medal.

Post-American Sniper, Cooper next stars in the John Wells-directed Adam Jones, and Joy, in which he reunites with Silver Linings Playbook and American Hustle co-star Jennifer Lawrence and director David O Russell. He’s also planning to direct and likely star in the remake of A Star Is Born at Warner Bros. Andrew Fischel and Julia Spiro are overseeing for the studio. Phillips is helming Arms And The Dudes. Cooper and Phillips are repped by CAA; Gayden is repped by UTA and Management 360.