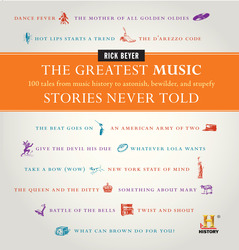 Beyers’ brief behind-the-music anecdotes date from 1400 B.C. to to 2007. Here are three that will rock you.

1) Art Fry, a 3M employee who sang in a Minnesota church choir, tended to lose his place in the hymnal; the slips of paper he used as bookmarks kept falling out. Fry got to thinking about a special glue one of his colleagues had created that wasn’t too sticky and would not dry. In 1974, the Post-It note was born.

2) Deep into the 53-page contract for Van Halen’s 1980 world tour was a strange request: the band’s dressing room must be supplied with M&Ms, but there must be “absolutely no brown ones!” For the band, this detail was “the canary in the coal mine,” Beyer writes. As David Lee Roth noted: “If I saw a brown M&M in that bowl, they [the promoters] didn’t read the contract. Guaranteed you’d run into a problem.”

3) Brian May, guitarist and songwriter for Queen, is an astrophysicist who finally earned his doctorate from Imperial College in London in 2007. (His thesis: ”Radial Velocities in the Zodiacal Dust Cloud.”) May says his background in physics helped him produce the “stomp, stomp, clap” section of We Will Rock You. In a pre-digital era, he was able to create the sound of thousands of people stomping and clapping with no echo at all.