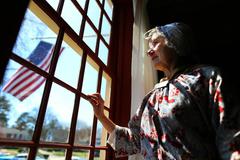 LEXINGTON — It took decades for the bickering to subside over whether Lexington or Concord had the bragging rights as the true birthplace of the Revolutionary War. But the skirmish may not be over just yet.

This spring, with the restoration and reopening of Lexington’s most visited historic building, Buckman Tavern, the Lexington Historical Society is hosting an exhibit exploring the debate over whether the war began when the British fired on militiamen at Lexington Green or whether the “shot heard ’round the world” sounded when the Colonials returned fire on the Redcoats at Old North Bridge in Concord.

At the end of the exhibit, titled “The Battle after the Battle,’’ visitors will be asked to vote on where they believe the revolution began.

“There still is a discussion — let’s say a friendly argument about this — to this day,” said Rick Beyer, cocurator of the exhibit. “It’s definitely still living around the history-geek crowd.”

The May 4 grand reopening of the tavern, just off Lexington Green, is part of a concerted effort to breathe new life into the way Colonial-era history is presented in the storied town. In the past five years, the Lexington Historical Society, using a combination of private, local, and state funds, has completed renovations to three buildings that played central roles in the events that unfolded in April 1775.

In 2009, the society completed renovations to the Hancock-Clarke House. It was there that William Dawes and Paul Revere, dispatched on their “midnight ride,” warned John Hancock and Samuel Adams of the advancing Redcoats. In 2011, renovations were completed at the Munroe Tavern, which was used as a makeshift hospital by British soldiers on the first day of the war.

Buckman Tavern, built in 1710, is the most popular tourist stop of the three buildings, and was where the town’s militiamen awaited the approaching British the night before the April 19 skirmish on the green.

The restoration work paid close attention to everything from the type of Colonial-era wallpaper in the ladies’ parlor to the paint colors on the staircase, while leaving the feel of the rustic tap room, with its low ceilings and big fireplace, largely untouched.

The $1 million renovation this spring also improved accessibility, climate control, and fire safety, and much of the focus has been on finding new ways to entice visitors to the national historic landmark.

“We want to be absolute historically accurate, but we also want it to be really interesting and fun,” said Susan Bennett, executive director of the Lexington Historical Society.

The renovation has converted the tavern’s underutilized second floor into museum gallery space, and Bennett said the historical society wanted a lively and humorous exhibit for the grand opening.

Beyer said his historically accurate but “not-so-serious” exhibit about where the Revolution began dives into the beginning of the debate in 1824, when Marquis de Lafayette, the French hero of the American Revolution, returned for a visit to Lexington and was greeted by a banner that said welcome “to the birthplace of American liberty.”

Beyer said that people in Concord were tired of Lexington getting first billing on where the war began, and claimed that what happened on Lexington Green was a massacre, not a battle. Beyer said that when Lafayette visited North Bridge in Concord, Judge Samuel Hoar told him that he was looking at the spot where “the first forcible resistance was made.”

The back-and-forth continued for decades. The hard feelings almost prevented a visit from President Ulysses S. Grant for the centennial celebration in 1875, then flared again in 1894 when the Lexington Historical Society petitioned the state to make April 19 a holiday.

Beyer said Concord residents balked at the idea of calling the holiday Lexington Day, and it eventually became known as Patriots Day.

David Wood, curator of the Concord Museum, said Lafayette’s visit did touch off the controversy. But Wood said that an exhibit now at the museum takes the position that the debate is no longer an issue, and that “the shot heard ’round the world” applies as equally to what happened in both Lexington and Concord, not to mention the actions of people in dozens of other communities on the first day of the war. “It’s misleading for any community to take credit for it, but that’s not to say they didn’t try in the 1820s,” Wood said.

Whether or not the dust has settled on the debate could be determined at the ballot box at the end of Beyer’s exhibit in Buckman Tavern. But the voting at the exhibit will not benefit from an unbiased curator.

“I think it started in Lexington,” Beyer said. “I’m not neutral at all.”