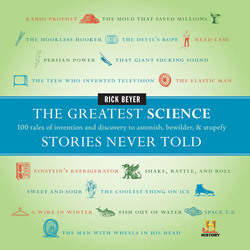 SCIENCE STORIES UNTOLD:  Lexington author Rick Beyer  attributes his lifelong interest in science and history to his father, the late Robert T. Beyer, a physicist who loved reading about the Civil War. Beyer combines these passions in his latest book, "The Greatest Science Stories Never Told: 100 Tales of Invention and Discovery to Astonish, Bewilder, and Stupefy.''

The fourth in Beyer's "Greatest Stories Never Told'' series, published by Harper Collins, the new book includes such tales as the origin of Teflon, Velcro, and the bobby pin; the refrigerator invented without toxic ammonia by a concerned Albert Einstein; the push-button phone developed by undertaker Almon Brown Strowger, who suspected a local switchboard operator of diverting business to a competitor; the work of William Marston, who invented both the lie detector and Wonder Woman; and how Charles Darwin was nearly prevented from embarking on the five-year voyage that led to his theory of evolution when the ship's captain objected to his large nose.

"I love all of the eureka moments and stories of accidental discoveries,'' said Beyer, who is also an award-winning documentary producer, adding that he hopes readers "will take away the idea that history and science are fun.''

Beyer can be heard discussing his book tonight on the "Jordan Rich Show,'' airing at 11 p.m. on WBZ-AM 1030. For more information, go to www.rickbeyer.net.