'The Wright Challenge' soars through history 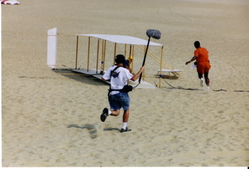 In the spirit of transcending commercialism, I'm sure you've often asked yourself what Jesus would watch this time of year if he owned a TV set.

But the point is, those 800 channels do contain programming that doesn't try to ram the holidays down your throat.

One such achievement is "The Wright Challenge," premiering on The History Channel at 9 p.m. tomorrow, using an unusual angle to celebrate the centennial of Orville and Wilbur's fabled 1903 flight at Kitty Hawk. The two-hour documentary follows four amateur teams attempting to duplicate the flight from scratch to finish, building their own reproductions, learning to fly gliders and finally moving to the big day.

The detailed attention paid to how these planes are constructed, the materials used and the adherence to, or deviation from, the original design is impressive. So is the careful referencing of the Wright brothers' blueprints and written archives, bolstered by vintage clips and photos.

However, I'm not a mechanic. Where "The Wright Challenge" really soars is in transmitting the lunatic enthusiasm and sweaty devotion of the aviation geek. It's about something we all can understand — overcoming boundaries.

Take Bufford Gross, a retired maintenance worker from Peru, Ind., who got turned on by his first model plane back in 1959. At the show's beginning, he's already built his Wright Flyer replica and his face crinkles with determined optimism.

"This is my heart's desire, to go for a re-enactment flight," he says, "My desire has been a long, long time coming."

But Gross has no money for insurance, no pilot's license and therefore no place to test his years of labor. I won't give away the ending.

Even if the participants tend toward white, middle-aged and male, the contrast among the four teams is evident in their approach to the competition.

At Utah State University's aeronautics lab, a group of professors and students take the Wright brothers' basic design and make considerable modifications in the form of modern technology and materials.

Meanwhile, teams in Chicago and the Wright brothers' home of Dayton, Ohio, stick closer to the original plans. That isn't easy, since it turns out the plans and the original plane went through some planned and unplanned transformations en route to the Smithsonian.

Even among the traditionalists, there's a difference. The Dayton team is made of people steeped in what the leader calls "aviation archaeology." They're steam-bending wood and stamping metal pieces.

The Chicago people are non-aviation types whose zeal vastly outweighs their knowledge.

"The Wright Challenge" has its own historically determined path to setting up the contest. Because the Wright brothers experimented for years with gliders, the 2003 teams must do the same.

Viewers get to watch a group of intensely competitive military pilots take turns trying to fly replicas of primitive craft and go crashing to earth time and again. Their efforts and comments are lively; the camera work is riveting. It gets even better on the day of the contest.

While occasionally given to overstatement, "The Wright Challenge" doesn't pretend what's happening is unprecedented. Back on the 75th anniversary of Kitty Hawk, a man named Ken Kellett managed a short, sustained flight in a Wright replica. He's interviewed for the program.

Interspersed is footage recalling an era when planes came out of people's garages, cellars and carriage houses.

Of course, planes were and are only the physical expression of something bigger. As one participant notes, and "The Wright Challenge" conveys vividly, "Dreams change the world."