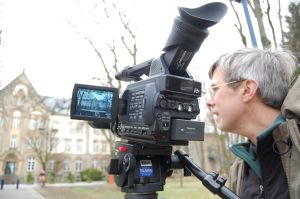 In June 1944, a secret U.S. Army unit went into action in Normandy. The weapons they deployed were decidedly unusual: hundreds of inflatable tanks and a one-of-a-kind collection of sound effects records. Their mission was to use bluff, deception, and trickery to save lives. Many were artists, some of who would become famous, including a budding fashion designer named Bill Blass. They painted and sketched their way across Europe, creating a unique visual record of their journey. The story of what these men accomplished was hushed up by the Pentagon for more than forty years.

The Ghost Army premiered on PBS in May, 2013.  It is now streaming on  Amazon Prime, and the DVD is available on Amazon and shopbs.org