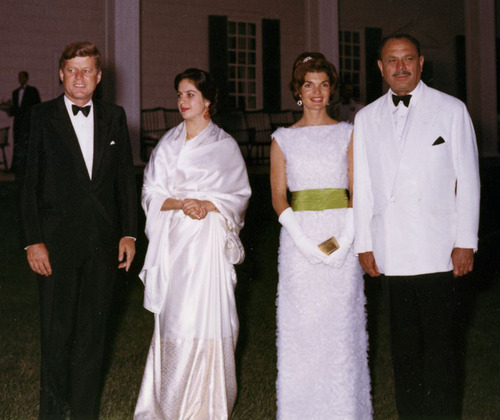 In the summer of 1961, First Lady Jacqueline Bouvier Kennedy sought a historic venue for a state dinner honoring the President of Pakistan, Ayub Kahn. She chose Mount Vernon, the home of George Washington. Guests were served mint juleps on Mount Vernon's piazza, followed by a dinner prepared by the White House chef. This short film, produced for History and George Washington's Mount Vernon, tells the story of this dinner through an interview with Mrs. Kennedy's Social Secretary, Ms. Letitia Baldrige, and archive pictures and film from the evening. It ran for more than a year accompanying the exhibit Setting the President's Table.

In the clip below, Letita Baldridge describes the mosquito crisis that almost ruined the dinner: