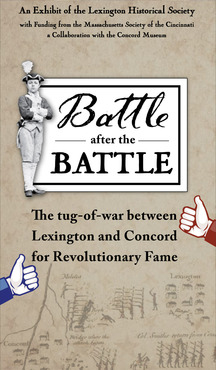 The Battle after the Battle takes a lighthearted look at two centuries of “local bickerings and petty jealousies” between the two towns, complete with bold graphics, historic artifacts, audio content, and hands-on displays. Visitors will be invited to vote for themselves whether Lexington or Concord has the better claim as the place the American Revolution really began.

Rick Beyer is co-curator of the exhibit, and will attend the grand- opening, as well as the 2 PM ribbon cutting for the restored Buckman Tavern.