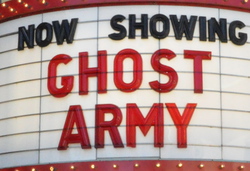 Come see the theatrical WORLD PREMIERE of The Ghost Army at the Salem Film Fest in Salem, MA.

Rick Beyer's new documentary tells the story of a and-picked group of American GI’s in WWII who staged a traveling road show of deception on the battlefields of Europe during WWII. The 23rd Headquarters Special Troops used inflatable rubber tanks, sound effects, and dazzling performance art to bluff the enemy. Many of the men were artists, some of whom went on to become famous, including future fashion designer Bill Blass. Their secret mission was kept hushed up for nearly 50 years after the war’s end.

Entering its sixth year, the Salem Film Fest is emerging as a leading American all-documentary film festival, showcasing a rich and diverse collection of the year’s best work from all over the world.

Ticket info will be posted when available.