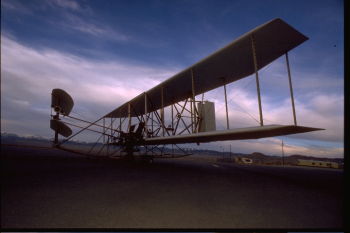 A replica Wright airplane built by the team at Utah State University.

Four groups each trying to build and fly a replica of the Wright Brothers 1903 Flyer, the plane that flew at Kitty Hawk.

Anyone building an '03 Flyer faces two challenges:  getting it right, and getting it in the air. The plane in the Smithsonian is actually a partial reconstruction by Orville Wright—and nobody knows what he changed. The smallest detail can make the difference in the plane being barefly flyable, or not flyable at all. The teams face many of the same obstacles the Wrights did, gaining a powerful appreciation for the efforts of the bicycle makers from Dayton who didn't have the advantage of 100 years of aviation hindsight.

The four teams come to the challenge from very different viewpoints: 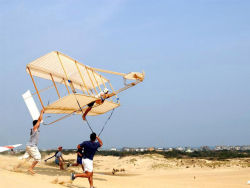 • From Dayton, Ohio, hometown of the Wright Brothers comes Nick Engler. A woodworker, author and pilot, he founded the Wright Brothers Aeroplane Company to build replicas of all the machines the Wrights built in their quest for an airplane. He calls what he's doing "aviation archaeology," a quest to understand by doing. He will employ military top guns as pilots, and they will discover, who discover than manning a Wright glider or powered airplane can be even more daunting than piloting the jet fighters,attack helicopters, and special ops planes they usually fly.

• Outside Chicago, a second group of enthusiasts that include an ad executive, a product engineer, a contractor, a landscaper and others who normally would not have associated with each other are brought together by their passion for the Wright plane. The team works nights and weekends, much like the Wrights, to built their aircraft. With limited time and money and almost no background in aviation, will these weekend warriors have what it takes to get their plane airborne--or will they just drive each other crazy?

• In Logan, Utah, a team of faculty and students at Utah State University plan to give the Wright Flyer a makeover because, as team member Wayne Goodrich says, the Wright Flyer "has the aerodynamics of a forklift." They plan to give the aircraft a 21st century redesign, building it with materials such as Kelvar, graphite and high-tech styrofoam. This isn't your grandpa's Wright Flyer. But will it fly as well as they are confidently predicting?

• In Peru, Indiana, 67-year-old Bufford Gross, a retired maintenance worker, has already built his plane, having labored over it for years, making every part himself. The question is, with no pilot's license, no insurance and no place willing to give him permission to fly; will he ever get the chance to test it?

Excerpts from "The Wright Challenge."