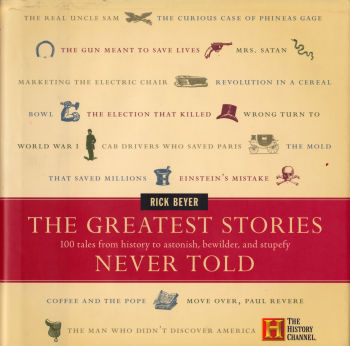 History is filled with unpredictable people and unbelievable stories.

Consider: The Pilgrims landed in Plymouth because they ran out of beer. Annie Oakley almost shot Kaiser Wilhelm before World War One. Three cigars changed the course of the Civil War. The stethoscope was invented by a modest French doctor reluctant to put his ear to a female patient's lavish bosom. Teddy Roosevelt is the father of football's forward pass. And believe it or not, actress Hedy Lamar not only appeared in the movies' first nude scene, but also later patented an idea that formed the basis for cell phone encryption.

As Dave Barry would say, you can't make this stuff up.

€ Meet a Viking named Bjarni who might have discovered America...if only he'd gotten out of his boat

€ Learn who was really the first president of the U.S. (Here's a hint: George Washington was actually number 8.)

€ Discover why a Civil War doctor invented the machine gun in order to save lives.